Living With Conditions An Opportunity To Fight 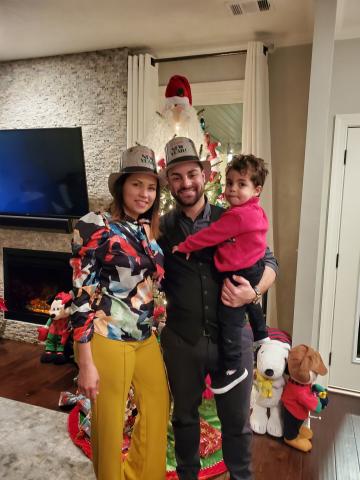 My brother, Alexis, was a perfect boy until the age of 6. On July 6, 1996, my brother suddenly went blind. After being hospitalized for 3 weeks and multiple evaluations in the pediatric university hospital of Puerto Rico, his laboratory results were sent to U.S. Alexis finally received a diagnosis. He had Adrenoleukodystrophy (ALD). Without any family history or knowledge of the disease, the doctors in Puerto Rico told us to watch the movie Lorenzo's Oil to know what was going to happen.

After several months, my parents traveled to the Kennedy Krieger Institute to meet with Dr. Hugo Moser and Dr. Gerald Raymond, principal ALD researchers. They told my parents that it was too late for a transplant for Alexis, but they suggested that my sister and I get tested for ALD, which we later discovered  we were carriers for. For my brother, it was too late as he remained bedridden for more than 12 years, dying when he was 18 years old. My brother had to die for us to discover that we were carriers for the ALD gene which eventually saved my son and nephew’s lives.

In 2011, my nephew, Gerald, was born in Puerto Rico, where ALD is not on the newborn screening panel. Because my brother died from a late diagnosis of ALD, Gerald was tested for ALD, and received a timely diagnosis. There’s no treatment for ALD in Puerto Rico, so my sister settled in Springfield, Massachusetts. My nephew would get MRIs every 6 months until December 2018, when his doctor notified us that his brain showed the first signs of the most severe and fatal form of ALD – cerebral ALD. The thought that my nephew could suffer like my brother was heartbreaking news. But the doctor told us that Gerald could receive a stem cell transplant that could save his life. In April 2019, Gerald received his transplant at the Boston Children’s Hospital, and almost a year later he has evolved perfectly.

In 2014, I left Puerto Rico to settle in Augusta, Georgia where my son, Jacob, was born in 2017. In his first month of life, I told his pediatrician that he needed to get tested for ALD. Two months later, the ALD diagnosis arrived. Since then, we’ve traveled to Boston every year for neurological evaluations and very soon at 3 years old, we will travel every 6 months for his MRIs. So far, my son is doing well and has a battery of excellent doctors.

Thanks to the diagnosis that my son received at birth, at my request, Jacob has the opportunity to fight. ALD is a cruel and fatal disease and children with a late diagnosis, like my brother, do not have the same opportunity. I hope that all children in Georgia and around the world have the same opportunity to fight and that this fight is not only for those who live in certain states or zip codes. We had the family history to know to request the test, something that no family should be required to do for a disease on newborn screening panels across the country. Newborn screening saved my son’s and nephew’s lives and has the opportunity to save even more lives in Georgia.

About this condition
Find more information about Adrenoleukodystrophy