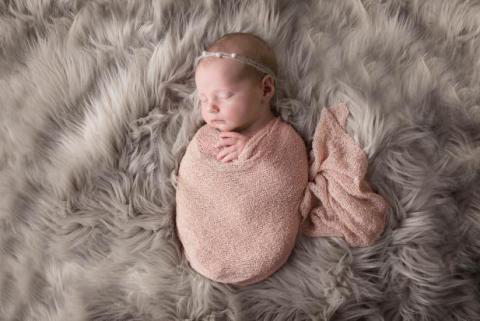 The first 2.5 days of her life we relished in this blessing before us. On Saturday, we noticed she was shaky. The nurses checked her sugar, and it was within normal limits. We were told that many newborns are shaky due to their nervous systems getting acquired to life outside the womb.

On Saturday night, a new nurse commented on her shakiness and asked if we remembered what the blood sugar was earlier that day. My husband, Alan, replied he thought it was around 20. The nurse replied with a strong, “Oh, she would be in the NICU if it was that number.”

I didn’t know at the time that this would be my first introduction to a metabolic crisis.

On Sunday around 6:00 pm, her temperature dropped. The nurse said she would return in 15 minutes to check it. She didn’t come back in 15 minutes. I paged her shortly after. By the time she came, Emma was cold and pale with a low tempature. Her sugar level was so low that the reader could not pick up the number. By 7:00 pm, they took her from Alan’s arms and forced a bottle into her mouth that she did not suck. She laid limp, unresponsive, cold, and pale. Before I knew what was happening, right there, in that very same room I fell in love with her, they took my 3-day-old baby away.

Logic tells a woman, they were saving her life by rushing her to the NICU. As her mother, it felt as though someone vacuumed the breath out of me. To go from the most “high” moment of your life when meeting your baby to her being taken to the NICU and you have no idea why -- there are just no words to describe that emotion. The word “fear” does not give it justice.

After a few hours, we were able to go to the NICU and see her. As we walked into the sterile room, the sounds of ventilators and beeping monitors were deafening in the stillness that is the NICU. What had been my crying, healthy newborn was a quiet, sick newborn in an incubator being kept alive by machines. My mind was in a fog, as the doctor said words like possible meningitis. They ran a 48-hour blood test to rule out infectious diseases.

The doctor held up a medical instrument, looked me in the eyes, and said, “I ran this across her foot and she had no response.” I stared back at her blankly, trying to interpret what she was trying to say to me. She tapped other reflex areas that “should have” given a reaction, but there were none.

Potential brain damage was now in the realm of possibilities.

By Monday afternoon, Emma’s blood sugar started to rise. She was still quiet and not crying. Most of that day, I spent crying. When I wasn’t crying, I was pumping to give her whatever milk my shocked body would produce. Later that afternoon, Alan wheeled me out for us to watch the rare solar eclipse of the sun. I like to think that was the universe's way of saying big changes were about to happen, and they did.

On Tuesday, the doctors removed the IV and she maintained her sugar levels on her own. She was crying, awake, and responsive. The infectious disease results came back negative. They determined she did not have a seizure and therefore no brain damage. Things were looking positive! We were told it is normal for a newborn's blood sugar to drop. They called Emma’s dropping at 3 days old a “fluke" and said she could stay the night in our room, and be discharged the next day!!

Little did I know, in just a few short hours, I would be in a place of preferring an infectious disease that can be cured.

I had just finished a call with my mom, and bought two donuts from the gift shop to take back to our room and celebrate! I even remember the insignificant conversation I had with the young lady working at the gift shop. Alan called me saying there was a doctor who wanted both of us in the room. When I got back, Alan and the doctor were standing there with Emma sleeping in the hospital crib.

He was a new doctor, whom we hadn't met because shifts had changed. That made his news that much more shocking. He stated the newborn screening results came back, and Emma tested positive for a rare, life threatening metabolic disorder called Medium-chain acyl-CoA dehydrogenase (MCAD) deficiency. He handed us a bunch of papers about it, gave us limited information (as he himself did not know much about it), and said it was imperative that we feed her every 2 hours, around the clock. If not, she could have a stroke, have seizures, go into a coma, or die. Life.Changing.Moment.

The following day, we were finally discharged and took our baby girl home, where she belonged. UNC's metabolic clinic called us on Wednesday and scheduled us for Thursday. All day Wednesday, I held onto a sliver of hope that the test was wrong. After all, we had a healthy non-MCADD toddler boy!

That Thursday, we drove 30 minutes to UNC for our metabolic appointment. The metabolic clinic is in the Children's Hospital. We didn’t wait too long in the waiting area. A nurse accompanied us back to a room. It was kid friendly enough, but that didn’t matter -- none of the “normal” stuff mattered. While in the waiting room, I saw a table with young kids, with masks and no hair, drawing. I saw another child in a wheelchair and I wondered if he had MCADD. The fact that the clinic is in the hospital only darkened the already bleak picture I had, at the time. I felt like I just became a member of a group I never asked to be a part of.

Once we were back in the room, 5 people in white coats walked in. They introduced themselves. The main doctor asked a bunch of medical history type questions, then explained that Emma has MCADD.  Still holding on to the hope of a false positive, I asked her if it’s possible the test is wrong. She pulled her rolling chair closer to my seat, never breaking eye contact, pulled out a paper with medical lingo and a bunch of numbers. She pointed to one in particular, looked me in the eyes, and said, “It is this number here that tells me, that indeed, yes, Emma has MCADD.”

Her confidence wiped that sliver of hope right off its plate. At that point, I broke down.

We were there for the next 4 hours. They gave us an official medical letter stating the urgency of the 10% dextrose drip that we were instructed to give to ER staff, if eating has become poor. The letter alone, was scary. I honestly could not tell anyone much more of what was said. My husband who is very logical, and was my rock through all of this, turned to me when they left the room and he cried as he said, “We should be enjoying this time with our baby girl.”

The management at that age was feeding her around the clock every two hours, which meant setting three alarms for the first year of her life. While MCADD's management is "easy," mistakes in timing are unforgiving.

Had my VBAC happened, that I tried so hard to make possible, Emma and I likely would have been discharged a day earlier, which would put have put us at home, instead of the hospital, on that Sunday. Timing is everything with MCADD. The time it would have taken us to drive to the ER, the doctors to figure out what was wrong, brain damage or worse would very likely have happened. BUT, I, we, were still in the hospital, so there was no driving, checking in, etc…. They pricked her heal in seconds and assessed on the spot. I can’t wrap my head around the fact that a VBAC birth would have put me, Emma, and my family on a completely different life track, not because of safety of the birth itself, but because of the discharge date. That track, being a mother to a permanently disabled child or a mother who lost a child.

Now, at two yearrs old, she goes 12 hours at night with no food, and we live a happy, active, milestone meeting, fussy, toddler life BECAUSE of that newborn screening test. A simple heel prick gave us knowledge that saves her life anytime she stops eating longer than she should or is vomiting ongoing. We know the protocol to take her to ER, she gets a 10% dextrose IV drip, gets discharged once she's eating again, and life gets to go on, with my baby girl.